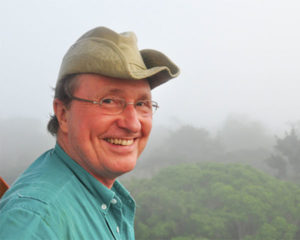 Thomas E. Lovejoy is a Senior Fellow at the United Nations Foundation and Professor of Environmental Science and Policy at George Mason University. Lovejoy, a tropical biologist and conservation biologist, has worked in the Amazon of Brazil since 1965. Starting in the 1970’s he helped bring attention to the issue of tropical deforestation and in 1980 published the first estimate of global extinction rates (in the Global 2000 Report to the President). He conceived the idea for the long term study on forest fragmentation in the Amazon (started in 1978) which is the largest experiment in landscape ecology, the Minimum Critical Size of Ecosystems project (also known as the Biological Dynamics of Forest Fragments Project). He also coined the term “Biological diversity”, originated the concept of debt-for-nature swaps and has worked on the interaction between climate change and biodiversity for more than 20 years. In the past, he served as the Senior Advisor to the President of the United Nations Foundation, as the Chief Biodiversity Advisor and Lead Specialist for the Environment for the Latin American region for the World Bank, as the Assistant Secretary for Environmental and External Affairs for the Smithsonian Institution, and as Executive Vice President of World Wildlife Fund-US. He has served on advisory councils in the Reagan, George H.W. Bush, and Clinton administrations. He received his B.S. and Ph.D. in biology from Yale University.