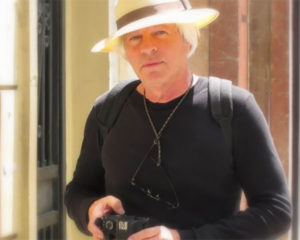 Reuben Aaronson is a distinguished Producer / Director / Cameraman whose distinctive work reflects a wide variety of films in his thirty year career. He has traveled the world to shoot and direct award-winning films about the human experience and international culture. He has created or worked on films for National Geographic, Discovery, HBO, PBS and many others. From Academy Awards two Emmys, Aaronson’s work is consistently recognized for its beauty and sensitivity.
Aaronson became fluent in Spanish after spending two years in the Peace Corps working in the slums of Santiago, Chile. Since then he has filmed in almost every South American country including a dozen projects in Peru where RIVER OF GOLD was shot. Over the years, Reuben has developed a deep personal affection for the Peruvian people and their history.
Other projects include a two-hour special about Mexico for the Discovery Channel and collaboration on the feature film The Thin Red Line nominated for an Academy Award. Reuben was also the cinematographer for The Ground Truth a feature length documentary that screened at the Sundance Festival and was short-listed for an Academy Award. He is currently working on two other documentaries in Peru, Finding Vilcabamba about the long anticipated discovery of the last capital stronghold belonging to the Inca Empire and a feature film 26 Days in Peru about the extreme left wing radical group The Shining Path.
Aaronson recently established NGOfilms, an independent film company to assist organizations in creating meaningful films about social issues of cultural significance and/or ongoing crucial work by noteworthy nonprofit organizations.