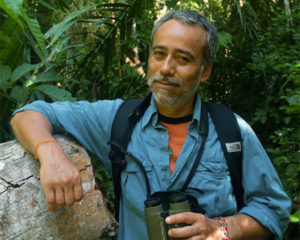 Enrique Ortiz was born and raised in Lima, Peru. He has been trained as a tropical ecologist (San Marcos University, Lima and Princeton University, New Jersey), with a long history of research on species and ecological systems in coastal/marine, deserts, highlands and tropical forest ecosystems. His specialty is in community ecology (plant – animal interactions) and he has authored several research papers and popular articles on a variety of themes, mainly on species biology, and management of non-timber forest products, particularly on Brazil nuts. Enrique has a solid knowledge of tropical forests (locally and regionally) from biological, social, economic, and political perspectives. Apart from his biological background, Enrique is perhaps better known for his activism and leadership throughout Peru and Latin America in conservation of biodiversity and ecosystems. He has been working with several Peruvian, Amazonian, and North American non-governmental organizations. He is a founder and board member of the Amazon Conservation Association and President of the Asociación para la Conservación de la Cuenca Amazonica, a leading Peruvian NGO. For over a decade he has been working on funding agencies in efforts to support conservation in the Andes-Amazon region. Together with Adrian Forsyth, Enrique is the founder of the Andes Amazon Program of the Gordon and Betty Moore Foundation. Since 2010 to 2015, he has worked for the Tropical Americas Program at the Blue Moon Fund, as a Senior Program Officer and then Program Director, working in a team with A. Forsyth and Bruce Babbitt, supporting national and international groups in efforts to protect the Amazon rainforests. Currently he serves as Program Director for the Andes Amazon Fund in Washington DC. Additionally, since 2008 to date, Enrique is serving as a member on the board of directors of Peru’s National Protected Area Service (SERNANP), of the Environment Ministry of Peru. Enrique is also an active outdoorsman. He often drives his motorcycle along the roads of Eastern USA. He lives in Washington DC, and travels frequently to Amazonian basin countries as well as other unpredictable wilderness spots around the world.